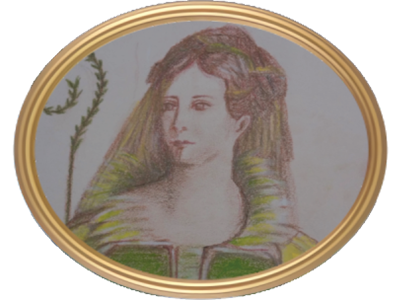 “The Creator is a woman and her name is Love”. Hildegard von Bingen

This extraordinary woman of the middle ages was a German benedictine abbess, also known as “the Sybille of the Rhine” as a writer, composer, philosopher, mystic, visionary. Her mystical visions which started at the age three, were revealed in her paintings and her theology. She wrote theological, botanical, and medicinal texts, as well as letters, liturgical songs and poems, while supervising miniature illuminations in the Rupertsberg manuscript of her first work, Scivias. She was the nurturer of the Divine Feminine and keeper of the fires of creativity.

Hildegard says that she first saw “The Shade of the Living Light” at the age of three, and by the age of five she began to understand that she was experiencing visions. She used the term ‘visio’ to this feature of her experience, and recognized that it was a gift that she could not explain to others. Hildegard explained that she saw all things in the light of God through the five senses: sight, hearing, taste, smell, and touch. Hildegard was hesitant to share her visions, confiding only to Jutta, who in turn told Volmar, Hildegard’s tutor and, later, secretary.Throughout her life, she continued to have many visions. At the age of 42, Hildegard received a vision she believed to be an instruction from God, to “write down that which you see and hear. She was “first” in many fields and also considered as a ‘femina universalis’. She is considered as the first representative of German medieval mysticism and is the first composer whose biography is known and wrote about 80 compositions for music.

Hildegard was as physician engaged in simple natural healing.She emphasizes the importance of the relationship between man and nature, as well as between body and soul. Health is closely related to being in harmony with nature. She was a major experimenter with herbal remedies. She catalogued the effects of over 200 herbs and plants and their medicinal effects on the human body, collecting them in epic volumes for future generations to discover. She wrote also the book Physica sive subtilitatum diversarum naturarum creaturarum, partly in German, partly in Latin. The German plant names from this book are among the oldest known. In her books Causae et curae and Physics she describes numerous medicinal recipes.

A guided tour given by a Pharmacist  through The Hildegard von Bingen-Garten in Kurpark Badweilen. Very worthwhile. 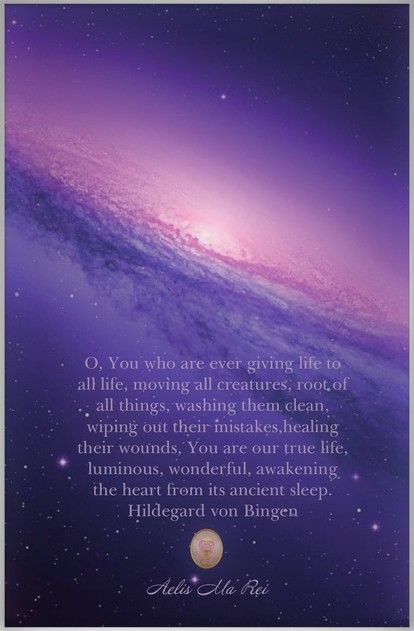 “Rejoice in him,who the many did not see on earth,although they ardently cried for. Rejoice in that which is on top.” Hildegard von Bingen

“Humanity, take a good look at yourself. Inside. you’ve got heaven and earth, and all of creation. You’re a world-everything is hidden in you”. Hildegard von Bingen

“Glance at the sun. See the moon and the stars. Gaze at the beauty of earth’s greenings. Now, think. What delight God gives to humankind with all these things. All nature is at the disposal of humankind. We are to work with it. For without we cannot survive”. Hildegard von Bingen

“Angels, living light most glorious! Beneath the Godhead in burning desire in darkness and mystery of creation you look on the eye of your God never taking fill. What glorious pleasures take shape within you! “. Hildegard von Bingen

with whom works of miracles

and not works of crime,

for burning predestined you were planted.

And to you, thoughtful fiercy voice,

Rejoice in that which is on the top

who the many did not see on earth,

although they ardently cried for.

Rejoice in that which is on the top”.